You asked to be here. So accept the country YOU accepted." Take It Or Leave It. Australia gets it!!!! In the USA, we should have such wisdom and fortitude, too!

Muslims who want to live under Islamic Sharia law were told on Wednesday to get out of Australia, as the government targeted radicals in a bid to head off potential terror attacks.


A day after a group of mainstream Muslim leaders pledged loyalty to Australia at a special meeting with Prime Minister John Howard, he and his Ministers made it clear that extremists would face a crackdown.

Treasurer Peter Costello, seen as heir apparent to Howard, hinted that some radical clerics could be asked to leave the country if they did not accept
that Australia was a secular state, and its laws were made by parliament.


"If those are not your values, if you want a country which has Sharia law or a theocratic state, then Australia is not for you", he said on national television. "I'd be saying to clerics who are teaching that there are two laws governing people in Australia: one the Australian law and another the Islamic law, that is false. If you can't agree with parliamentary law, independent courts, democracy, and would prefer Sharia law and have the opportunity to go to another country, which practices it, perhaps, then, that's a better option", Costello said. Asked whether he meant radical clerics would be forced to leave, he said those with dual citizenship could possibly be asked to move to the other country.

Education Minister Brendan Nelson later told reporters that Muslims who did not want to accept local values should "clear off. Basically, people who

don't want to be Australians, and who don't want to live by Australian values and understand them, well then, they can basically clear off", he said.

Quote: "IMMIGRANTS, NOT AUSTRALIANS, MUST ADAPT. Take It Or Leave It. I am tired of this nation worrying about whether we are offending some individual or their culture. Since the terrorist attacks on Bali, we have experienced a surge in patriotism by the majority of Australians."
"However, the dust from the attacks had barely settled when the politically correct' crowd began complaining about the possibility that our patriotism
was offending others. I am not against immigration, nor do I hold a grudge against anyone who is seeking a better life by coming to Australia."

"However, there are a few things that those who have recently come to our country, and apparently some born here, need to understand. This idea of Australia being a multicultural community has served only to dilute our sovereignty and our national identity. As Australians, we have our own culture, our own society, our own language and our own lifestyle."

"This culture has been developed over two centuries of struggles, trials and victories by millions of men and women who have sought freedom"
"We speak mainly ENGLISH, not Spanish, Lebanese, Arabic, Chinese, Japanese, Russian, or any other language. Therefore, if you wish to become part of our society, Learn the language!"

"Most Australians believe in God. This is not some Christian, right wing, political push, but a fact, because Christian men and women, on Christian
principles, founded this nation, and this is clearly documented. It is certainly appropriate to display it on the walls of our schools. If God offends you, then I suggest you consider another part of the world as your new home, because God is part of our culture." "We will accept your beliefs, and will not question why. All we ask is that you accept ours, and live in harmony and peaceful enjoyment with us.

If the Southern Cross offends you, or you don't like 'A Fair Go', then you should seriously consider a move to another part of this planet. We are happy with

our culture and have no desire to change, and we really don't care how you did things where you came from. By all means, keep your culture, but do not
force it on others."


"This is OUR COUNTRY, OUR LAND, and OUR LIFESTYLE, and we will allow you every opportunity to enjoy all this. But once you are done complaining, whining, and griping about Our Flag, Our Pledge, Our Christian beliefs, or Our Way of Life, I highly encourage you take advantage of one other great Australian freedom, 'THE RIGHT TO LEAVE'!"

“If you aren't happy here then LEAVE! We didn't force you to come here. You asked to be here. So accept the country YOU accepted." 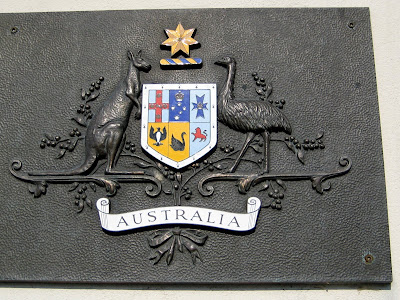