How far has it gone? 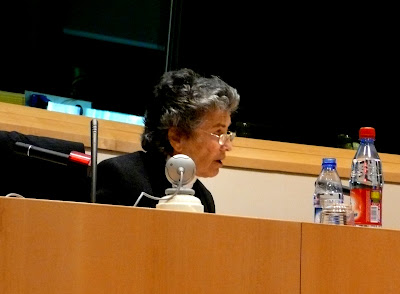 
The title of this lecture was not chosen by me, but I found it excellent and will try to examinehow deep the damage is now.
I will start by a warning: have no illusions. The Eurabia in which we live is solidly established although there are some improvements since the election of Angela Merkel and Nicholas Sarkozy, and also the realization by more and more people that things cannot go on like this.
For 40 years Eurabia has built its networks, its finance, its hegemonous power, its totalitarian control over the media, the universities, the culture and the mind of people. If one wants to end this system, one will have to reverse decades of policy. In fact, I do not know how we can get rid of a culture; we still live with Nazism, the genitor of Eurabia, with fascism and communism which have structured its networks system.
And this is not said by me only, but by others who know well this subject: Vladimir Bukovskij and Pavel Stroilov in their book: EUSSR (European Union of the Socialist Soviet Republics). Eurabia grew within the growth of the European Community (EC) and then the European Union (EU). It was conceived and planed by the European Council and implemented by the European Commission as a supranational policy, linked to the European Community interests and immediate security concerns over terror and energy supplies.
The EC correlated a massive Muslim immigration to a strategy of peace and stability in the Mediterranean, hoping that the Euro-Arab symbiosis through economic development, soft diplomacy and multiculturalism would guaranty peace, markets and oil.
In the Euro-Arab policy, Muslim immigration is welcomed as an element of a Mediterranean geo-strategy conducted as a partnership with the Arab-Muslim world on the base of pacifism and continual funding and services provided to the Arab world, similar to the subsidies given to the economically underdeveloped EU member-states………………………….
Foredrag, 10 sider pdf.